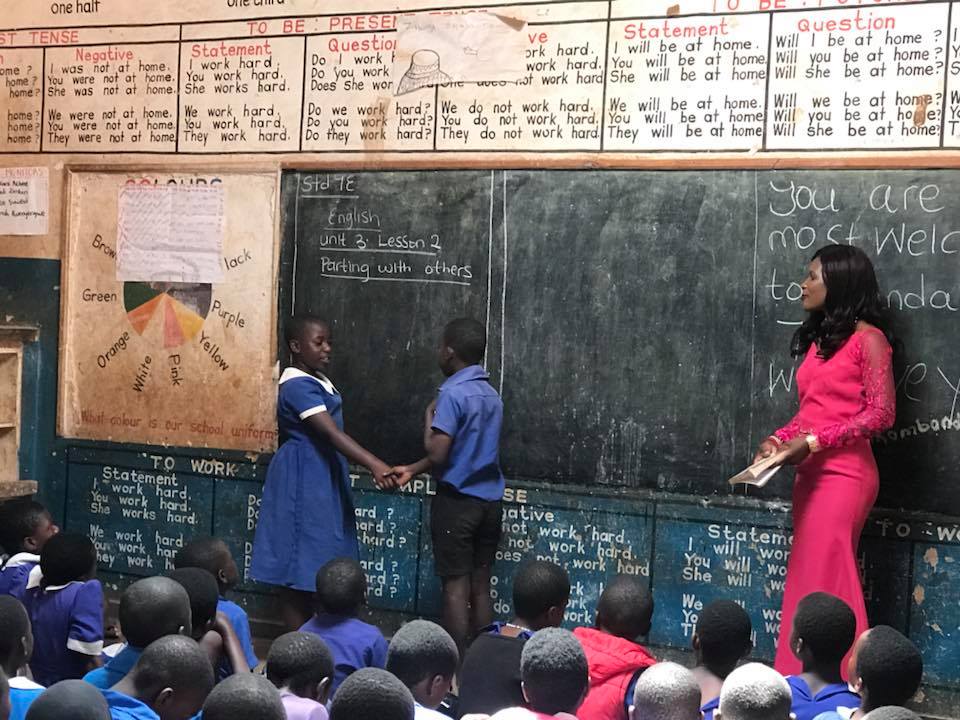 Yesterday was such a beneficial day as it allowed all of us to visit the school we’d be working in, as well as meeting some of the staff too!

We were all even more excited to begin our work today…

Breakfast at Kabula was great! I’ve developed a new love for pancakes and chocolate spread! Wilson and Foster visited us briefly and said they would return to have a discussion with us about our experience so far. We then piled in the mini bus and car ready to begin the next chapter of our Malawian adventure!

First off was Evelyn and Janis who were dropped at Blantyre Girls School. The lovely Ruth came out to greet us before we headed off to drop Mary and Viv at Mary’s Meal. Next off was Laura and I at Kapeni, followed by Stephen and Fran at Chisewani. As we approached Kapeni, it seemed much quieter than yesterday. Most learners were all in classes where lessons had started. We were greeted warmly by Douglas who introduced us to his three Deputy Head Teachers, Ruth, Grace and Wilson.

He continually reminded us of how welcome we were and we quickly got to business as we discussed what outcomes he wanted us to all have achieved by the end of our time here. It was decided that we would work across different stages, using an observing and coaching model to share good practice. We would also hold staff CPD for all of the 80 teachers to attend!

Douglas talked us through his school budget for the year. A mere £2500 for the full year.

This was being spent on quality and relevance, access and equity and governance and management. Douglas and the Kapeni team’s spending of the budget seemed to be very effective and was distributed equally between each goal. During the meeting, we also had the opportunity to meet the chair of the Parent Teacher Association. Douglas talked of how important both parent and community links for the school are, something that we are keen to develop!

During our meeting, Douglas received a phone call to say that a Standard 2 pupil had been fetching water from a dam at the weekend. He had went missing and his body had been recovered earlier in the morning. He had many siblings at the school.

This is unfortunately the sad reality of life in Malawi.

After we had gathered our thoughts, Douglas gave us another tour of Kapeni. We visited the Borehole where the learners retrieve water from, as well the Mary’s Meals kitchen where all learners are fed in the morning. We also saw some of the mothers who come to seek snacks or ‘Play Pieces’ for the learners during break time! A lot the snacks consisted of corn snacks, fruit ices etc.

Douglas then took us down to a block that had ‘Unlocking Talent - Transformational learning for Malawian children’ written on the side. When I asked what it was, he replied “Just wait and see.” Nothing could have prepared me for what was inside…

Laura D said my face was a picture! There were around 30 Standard 2 learners sitting on mats on the floor. They had iPads and headphones and they were practising their Chichewa using an App that the teacher was controlling on her own device! There was also a charging unit at the front of the room to charge the devices. Douglas told us that this charity had gifted these around 3 years ago!

Teachers had been trained on how us these and they tried to ensure each class received around 30 mins a week! We went next door the other classroom where both Laura and I had a go at practising our Chichewa with the iPads! Both teachers in the class were continually rotating around the ensuring the learners were managing the tasks well. Absolutely amazing!

After the excitement of this, we were invited to the staff room to meet around 40-50 of Douglas’ staff. They welcomed us with a prayer and we were gifted some beautiful flowers, singing and dancing from some of the learners. We took turns to introduce ourselves and speak a bit about our schools and the aims of the project. I was happy to meet a teacher called Tasha! It should be easy to remember her name as she also has a big bun like me! After a few more pictures, we were offered biscuits and Fanta from Douglas and the Deputes. They were incredibly kind and brought along a bowl and water for us to wash our hands, something that is very common in Malawi before eating meals.

We were keen to get into classes and we were invited into a Standard 7 class today. The teacher’s name was Loveness and oh my goodness, what a glam lady!

She had a beautiful pink dress and the most glamorous of hair. Her 126 learners all sat on the floor as she introduced the lesson. She recapped on the previous and asked learners to tell her what they had previously learned. They did this by holding up a piece of paper with their name on it. I don’t blame her! 126 learners names to remember could be a pretty hard task, particularly in those amazing heels of hers! From there, she shared what the learning intention was going to be for this current lesson. The lesson focussed on ‘Parting with Others’. She modelled how one would state they were leaving and how to appropriately converse in saying goodbye. After she modelled this, she then asked learners to come up to practise with her. They then did this with a partner and some even came up to model this with Laura and I - or Laura squared as the staff now call us :)

All in all it was a fab lesson and before we left we said Cheerio to the learners!

We then went into our second staff meeting (with the other half of the staff). Again we were warmly welcomed and excited to see everyone!

While we waited for the bus after what had been an incredibly exciting day, we sat and spoke to Ruth and Grace the two Deputes. They asked us many questions about education in Scotland and told us of how many of the learners in Malawi and in Kapeni, were orphans and/or had HIV. Again, a harsh reminder of life in Malawi that is sometimes forgotten about when you see the beautiful smiles, passion for learning and all round warmth from the people you meet.

Back on the bus and I am absolutely buzzing! We had an amazing first day and were very excited to head back again tomorrow!

Chilled night tonight as we all exchange stories and pictures from today. The lovely Miss D is cooking for us tonight.

Learners sitting on mats on the floor. They had iPads and headphones and they were practising their Chichewa 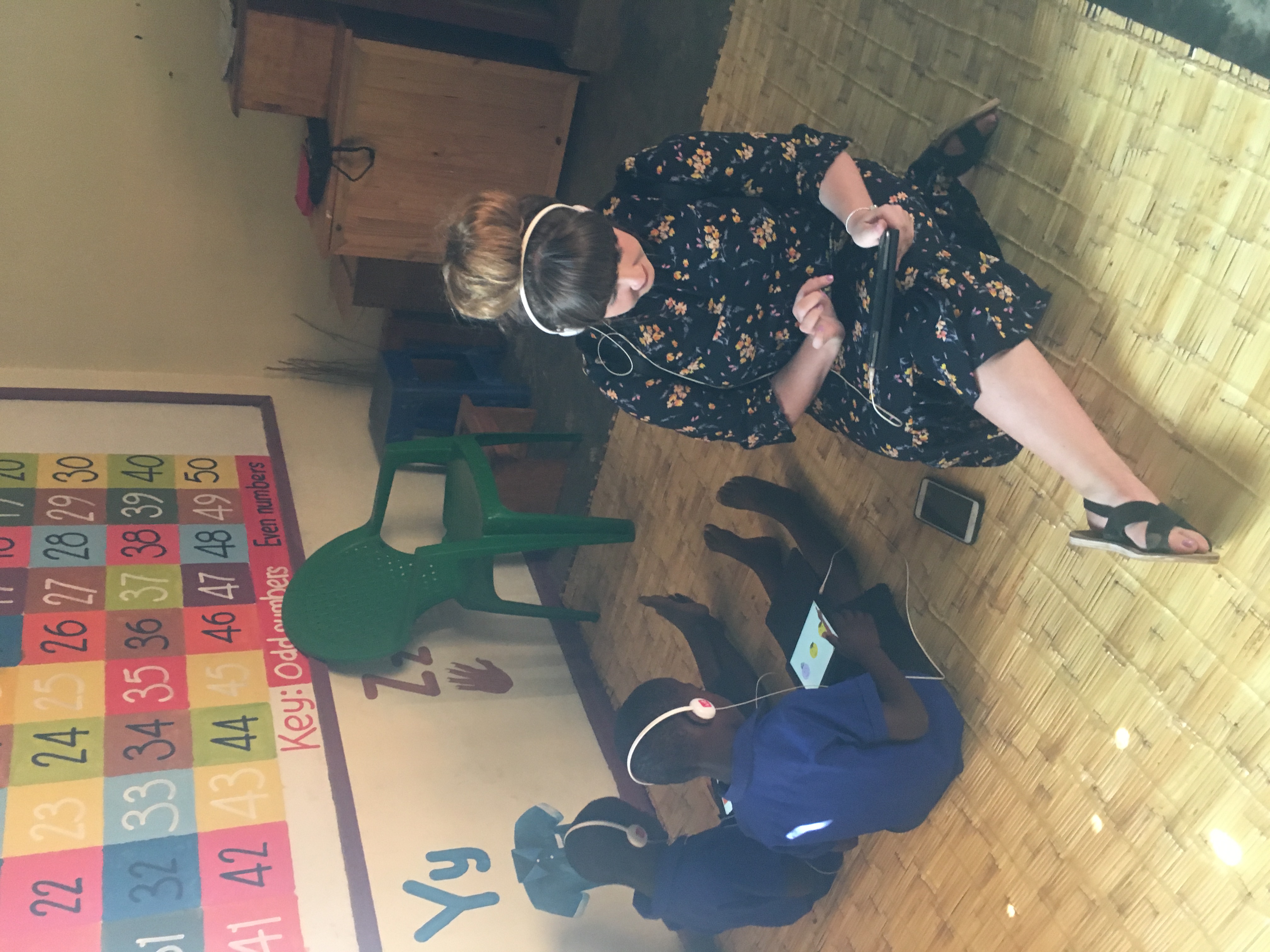 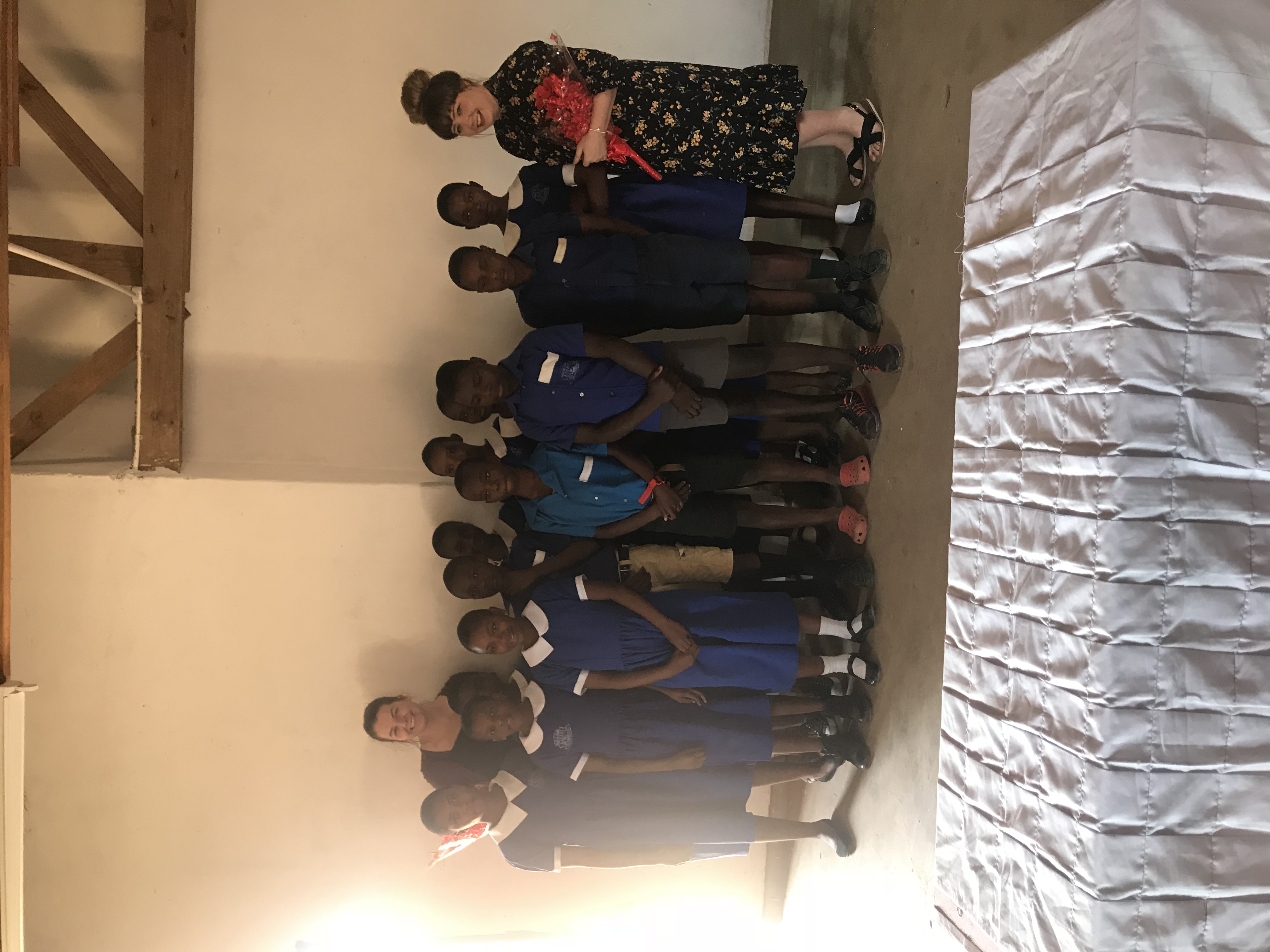 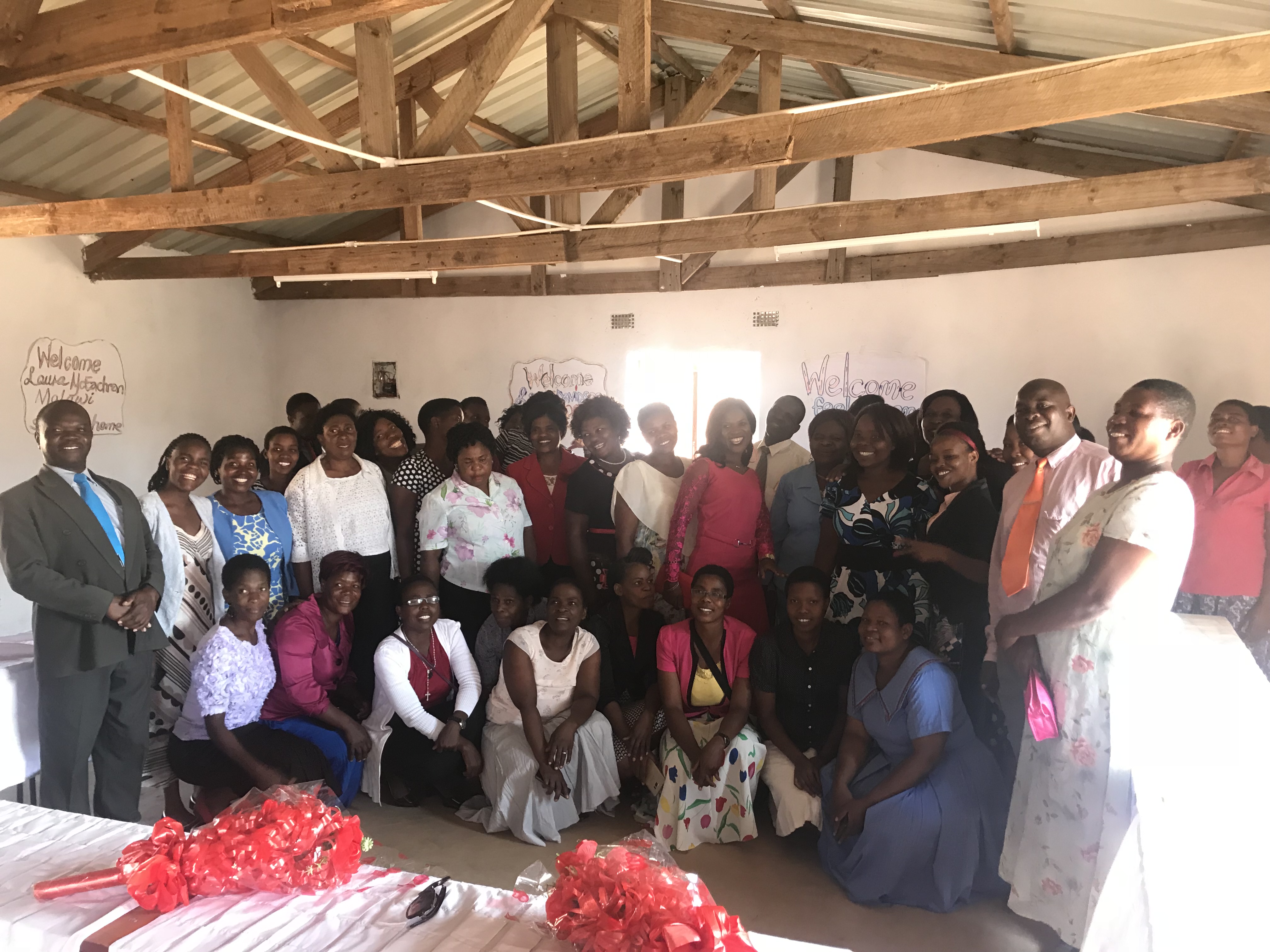 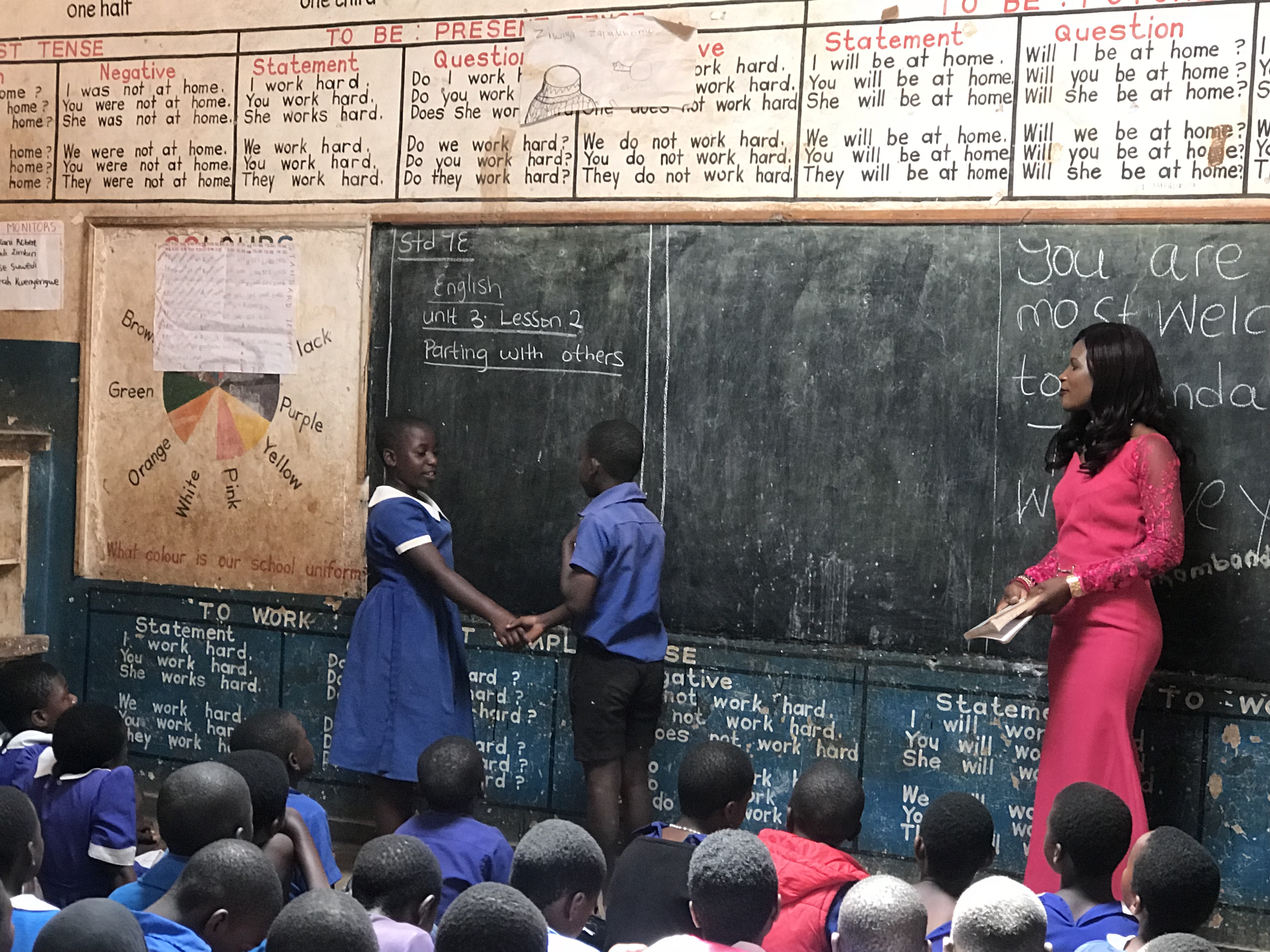 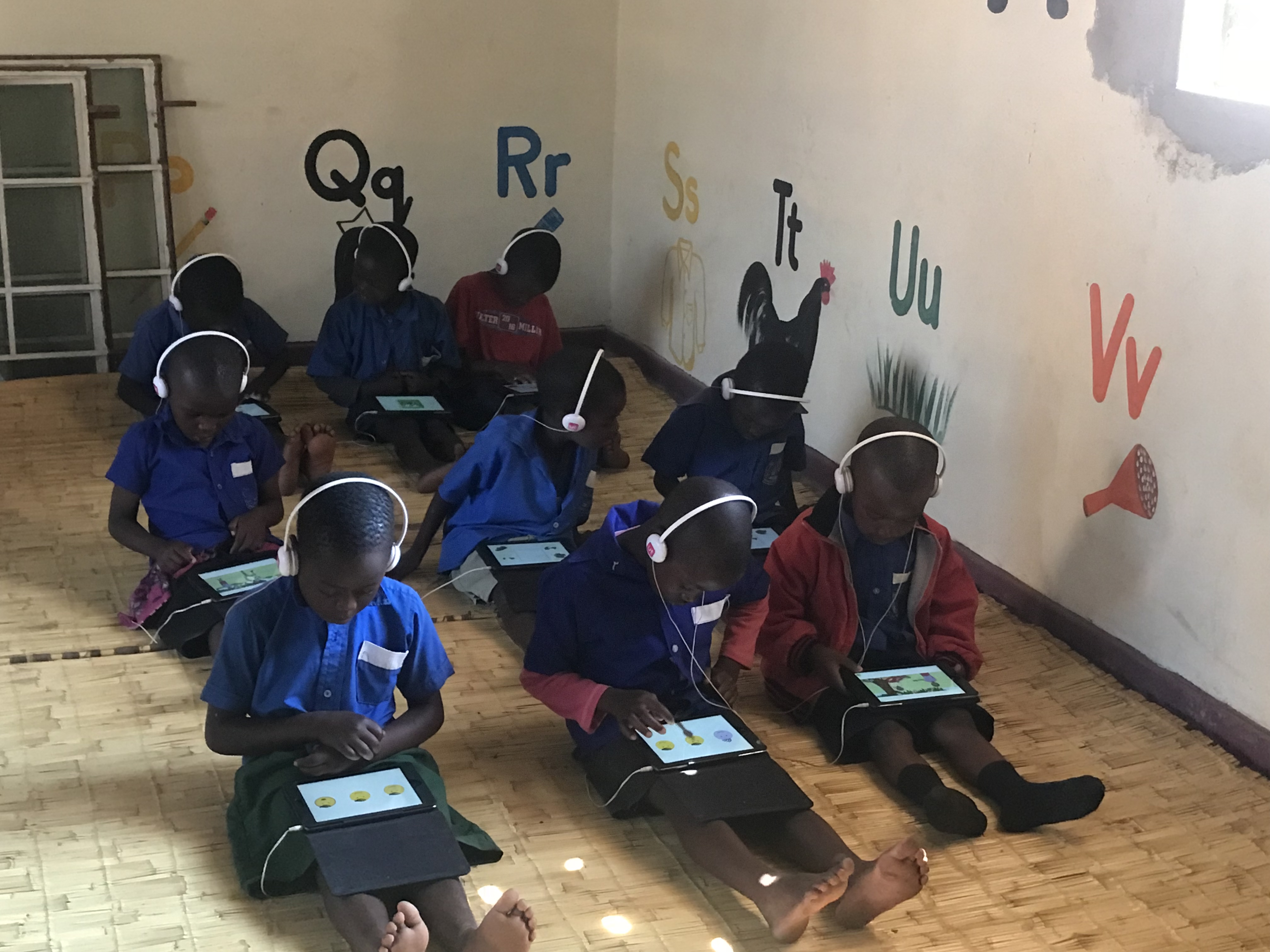